My friend Mike owns a champagne importing company in Connecticut, called Transatlantic Bubbles.  I met Mikey on an unforgettable trip to the Russian River Valley many years ago, when I was invited along to celebrate his and a friend’s 30th birthday.

Each year, Mike and his business partner, Jeff, put together a week-long trip to Champagne to visit some of their marquis producers.  They invite some of their best clients and an occasional charming American living in Europe (or three) to partake in some of the festivities.

This year, I was able to join the group at the end of their week to visit one of my favorite producers, George Laval.  Mike introduced me to Laval on a beautiful spring night in London, when he brought a bottle to our dinner picnic on Islington Green, a very small park, a patch of grass really, in the north of London, near where I used to live.  It was an unassuming bottle, with a simple label.  Mike brought it to life with the story of the producer, and I was intrigued as he poured the golden colored bubbly treasure into my plastic champagne flute (we picnic in style).  And what I tasted, is undoubtedly the best champagne of my life.  The taste is indescribable, but as I'm an aspiring writer, I'm going to try.  :)  This champagne almost has as a texture, it is creamy and smooth, with a slight hint of apricot.  There is no sugar, and it doesn't need it.  It's just, well, perfect and I relish in the feeling of the delicious little bubbles tickling my throat.

So when Mike asked if I wanted to go to a tasting, I put in a half day request, and got my little butt on the train from Paris to Épernay, a city in the Champagne region!


We were greeted by Vincent Laval, George’s son, who now runs the vineyard.  Vincent is exactly how you would imagine a French champagne producer.  He is a jovial man – tall and heavy set.  A straw hat sits atop his head, I imagine it has protected him from the sun during many harvests.  He has a round face, which seems forever brightened by a full toothed smile.  He speaks to us in broken English, but this does not stop him from making jokes that incite giggles in all of us.  He has a good spirit, you can feel it. 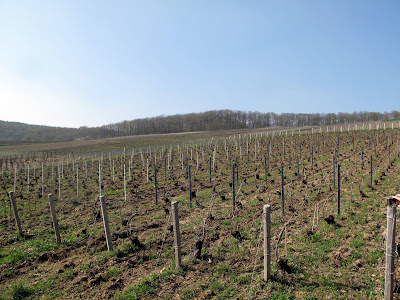 Vincent takes us out to his vineyard, where the vines lie dormant, waiting to bloom during the impending spring.  If we returned in a few weeks, we’d likely see green leaves starting to peek out of little brown notches along the vines.  Vincent puts his hand in the earth and shows us that it is good earth.   There is a reason.  In a world demanding more efficiency, more science behind wine, more use of technology, the Laval family has stuck to the tried and true.  His vineyard is organic, he uses no chemicals or pesticides on his vines.  He hand harvests the grapes when they are at their peak.  And the difference shows.  If you look at his patch of terrain and the one next to it, the dirt is dull, it looks lifeless, as if it will all blow away in a good wind.  Later, Vincent shows us his vine in comparison to a neighboring vine.  His vine buries itself deep in the earth, soaking up the terroir of the region.  The other vines spider out just below the surface, starved of the nutrients and close to disruptions outside.  It’s really incredible, just look at the picture. 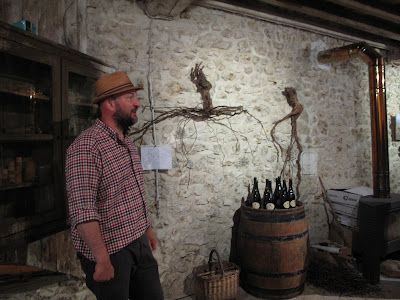 After tasting a few draws from the barrel, Vincent invites us to his cellar.  It is small and unassuming, nothing like the gargantuan cellars of Napa or other big producers in this region.  The cave is built into the chalk rock on which Épernay is built - it's kind of neat, you can pick up bits of chalk and it is this chalk that marks bottles and signs, indicating what masterpiece is forming itself in that area.  Vincent opens bottle after bottle, letting us taste the spectrum of his collection – from new to old, to rosé, to a unique Laval red…only this region of Champagne ever produces reds.  They do it more for fun, but they do it well.  He opens the bottle that got me hooked – a 2005 Cumières – he only has a few left in his cellar.   When those delicious bubbles swish in my mouth once again, I am lost in this moment and how unique of an experience I'm living. 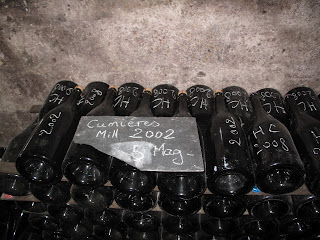 A visitor from a neighboring producer sums it up perfectly: “It is the people who have the least that give the most.”  Laval only produces around 15,000 bottles a year – that’s not much to live on in the world of champagne production, but to us, he is generous.  He is happy we are in his cellar, making memories, sharing laughs, finding inspiration into what he has put so much love and work into.  He brings in some foie gras to share, the texture is absolutely perfect and it is peppery and spicy.  It is possibly the best foie gras I’ve ever tasted.  But at this point, I’m four glasses in, so everything is making me happy.

The week ends with a party, as all good weeks should end.   The party’s list of attendees include the producers and their families, giving them a chance to taste wines they’ve never tasted before.  This party is starting to become legendary in the region, those who can’t attend are disappointed.  Jeff and Mike take over 30 wines from their private collection to taste – a wine tour around the world if you will.  These wines make me reconsider Chardonnay, solidify my love for Rioja (it’s hard not to love a good bottle from ’76) and give me the confidence that I’m gonna get the hang of this wine thing someday.

The night ends with wine still left in the bottles, but three brave souls understand this opportunity doesn’t happen everyday and make it their mission that no good bottle should go to waste.  I couldn’t agree more, but I can't keep my eyes open.  Though I do my part the next day, helping to finish the bubbly over a breakfast of leftovers from our French country feast.  Tchin tchin!


A few more snaps from a wonderful weekend...