Hi,
Ok, I booked the hotel for San Sebastian (with a view of La Playa de Concha).  Should I make the reservation to Arzak for Thursday night?

Ok you were right, it is impossible to go to ARZAK but...we will go to something better.  Arzak is number 8 in the world's 50 best restaurants and Mugaritz is number 3!! I booked a table for the 24th at 21:30 :-)
Have a great day.

Real life, Thursday, May 24th - 21:40, somewhere in the Basque countryside near San Sebastian

No trip to Basque is complete without basking in the Michelin star.   This region in Spain has one of the highest Michelin star per capita ratios in the world.  In area of less than 200,000 people there are about 14 stars.  I checked two of them off  of my to-do list on May 24th.  :)  And for a multi-star experience, Spain is much more affordable than cities like Paris.

I hadn't heard too much about Mugaritz in my research so once the reservation was confirmed, my fingers set to work in the Google search box.  And I have to admit, after poring over pages of blogs - I was nervous.  The chef, Andoni Aduriz, apprenticed at El Bulli, which used to be the best restaurant in the world and carried a three star rating.  El Bulli's chef, Ferran Adria, is one of the fathers of molecular gastronomy.  I'll keep it short and simple, molecular gastronomy has never interested me.  Perhaps it's the science behind the food - I'm more of a culinary romantic.  I am in awe by the simple beauty of food.  I don't want my food broken into compounds and run through processes I can't pronounce.  It feels over-engineered, unnatural and elitist.  That is probably my elitist way to say I never liked chemistry, though it explains much of life.  :)  Back to Mugaritz - the more research I did, the more nervous I got.  What the hell was I going to eat?  But I couldn't back out.  You don't say "no" when someone books you a reservation at the third best restaurant in the world.  You shut your mouth, dress up pretty and go.


We arrive to Mugaritz slightly later than anticipated, due to a GPS that didn't know where it was going.  (Seriously, it was the fault of the GPS.)  We missed sunset on the patio and had to go straight to the dining room.  If you ever make it here, make time for sunset on the patio.  It seems like one of those places where you get a delicious glass of wine, you let the last rays of the sun warm your skin and you have one of those moments where you pause and note how awesome your life is.


The inside of the restaurant was warm and inviting, full of circle shaped tables that are big enough for six but strangely enough, cosy for two as well.  Our waiter immediately invited us into the kitchen, where one of the head chefs greeted us and gave us our first course.  It was a macaron. Anyone who knows me, knows I can't resist a macaron so I eagerly gobbled it up and savored it while the head chef gave us a little bit of background about the kitchen.  It was impeccably clean and there was a quiet and orderly chaos of people in white shirts and crisp brown aprons creating masterpieces.  It had a good energy.  She explained that the staff was from 15 countries, so I immediately felt at home.

Now as I was entranced by the conversation, I was also equally entranced by the macaron.  It was a savory macaron, but there was an interesting combination of bitter within its soft yet crunchy texture. As I'm still deciding my stance on savory macarons, I allowed myself to be open to enjoying it.  The chef then explained what we were eating - a blue cheese and black pudding macaron.  Black pudding = congealed pig's blood.  You die hard foodies are like so what, black pudding, no biggie.  I said to myself, "Oh shit - I don't know if I can do this," but I nodded in fascination and concealed my nervousness with a smile.

Back at the table, the waiter kindly assuaged my fears by asking if there was anything I couldn't eat or just didn't like.  We were having 20 courses (wow) but there were about 30 on the menu and he wanted me to enjoy my experience.  Not being a huge seafood fan, but wanting to push myself to try new things, I confessed this to him and asked if we could switch out anything that was really "unique".  So we switched out sea urchin and a strong tasting fish, and he went and printed our menus.  This small gesture made all the difference.  I immediately felt at ease and ready to embrace the experience, instead of be nervous about it.

Our meal started with a simple letter.  See below.  When opened, the card inside read, "Satiation eludes bread and olives..", a promise of something unordinary.  The letter was different from your average letter.  You could EAT it, accompanied with the delicious tapenade that came at its accompaniment. 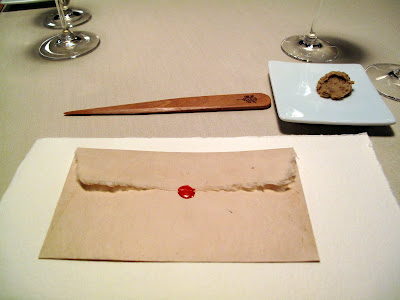 The second course required some work on our parts.  We were given a mortar and a pestle and had to grind our own seeds and grains.  After we finished our contribution to making the meal, we were delivered a deliciously frothy broth to pour over our mixture.  It was delicious and above all, it was fun.  It was nothing like the stuffy experience I expected out of the evening.

And so the evening past, as we had one delightful dish after another, washing it down with my first white Rioja (2008 Remelluri), which may have been one of the most delicious whites of my life.  Each dish surprised and awed and made you think, hmm - how did they do that?

Here is what we ate complete with pictures below.  Some of the translations are almost too poetic and not at all descriptive - I left them for effect.  :)

*Caution, may cause foodgasm.


It was a lot of food, but I enjoyed every dish.  The night passed at a good pace and we left satiated but not ridiculously full.   And I discovered something new.  The cornerstone of molecular gastronomy is that it is supposed to be a sensory experience.  The chefs, which hate that it's called molecular gastronomy, are trying to explore cooking from every angle - using many different ingredients, techniques and tools.  Through this, they create something that is a unique sensory experience.  I can respect that.  And Mugaritz delivered it.  In the end, the experience was simply delightful.  We closed down the restaurant and winded our way back down into San Sebastian.