June 20, 2011
This weekend, I went to the Taste of London.  Food festivals are always so inspiring.  Some things that I taste, I know I could never make without tons of practice and likely tons of failure.  Other things are deliciously simple but people are so intimidated by the exotic ingredients, they convince themselves that to re-create something so good would be utterly impossible.
Such are my thoughts about our delicious friend the truffle.  But then I thought - this is just a mushroom, dammit!  Am I going to let a mushroom defeat me?
I think not.  Jackie vs. Truffle, game on.
And so there I sat, contemplating the truffle in front of me, my mouth watering at the thought of what it could taste like if done right.  But nagging little thoughts entered my mind and turned to culinary terror - what if I ruin this truffle?
The skin of the truffle is dark, bumpy and rough.  As a food, it looks quite intimidating.  If it were a person, I'd find it hard to be friends.  But you know what they say about judging a book by its cover or a mushroom by its skin...  So I speak to the truffle, asking for guidance and attempting to be friendly.  I want it to know I care deeply about pairing it with the right ingredients and preparing it as best I can.  Somehow, I think this will give me good truffle preparation karma.  Hold your comments about the fact I'm talking to a fungus.
I try to calm my fears for a moment and immerse myself in the task at hand - figuring out how to cook this.  First problem, besides the fact I have a truffle staring at me, impatiently waiting for my decision about what I'm going to do with it, is I don't know what kind of truffle it is.  I didn't ask, I was too mesmerized by the fact I was buying a truffle.  Why is this important you ask?  You cook black truffles, you don’t cook white ones…the panic starts to set back in.  More internet research and I confirm that it’s a black truffle.  White truffles are well, white.  :)  (Listen a white rhino isn't white, so it's always best to verify things like this.  The plant and animal kingdom can be a tricky place.)
I settle on an asparagus truffle risotto for tonight's dinner.  I was so excited by the truffle that I had to have company; I prefer to cook alone the first time I make things.  I make a small side salad with a lemon and white wine vinaigrette for a starter.  For dessert, I use what's around the house and I make a peach and raspberry fruit salad with an agave lime dressing, mint leaves and some chocolate shavings.  A bit of an experiment but I think it will be refreshing after a rich risotto. 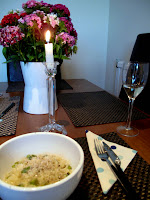 Kristen, acting sous chef, is there to see the special moment.  She even takes a picture and posts it to her Facebook page.  The world now waits in anticipation.  We take our first bite...yum.  We hungrily devour our risotto but wait...we can't taste the truffle.  Why?  Who knows.  I shave more fresh truffle on the top - maybe I cooked the flavor out?  Still nothing.  After a few expletives (due to my second glass of wine - yes, I'm that easy), I cut the truffle and make us eat it raw.  Still nothing, it tastes like, well, fungus.  Ew.  Sigh... At least it was a good meal with good company. Can't ask for more than that!

Stats:  Results in the battle of Jackie vs. Truffle - Jackie defeated by flavor withholding truffle.
While I make a mean risotto, I'm still a truffle novice.  I have half of a truffle left.  I'll let you know if anything good comes of it.
cooking london